Posted at 23:56h in News by ESadmin
By BRENT LANG 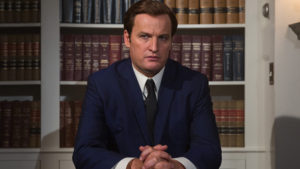 Byron Allen’s Entertainment Studios is busy breaking out its checkbook.The newly formed media company has landed domestic rights to “Chappaquiddick,” a buzzy drama from John Curran about one of the most infamous political scandals in American history. The film sold for $4 million. Allen’s company has committed to spending $16 million on prints and advertising for the film.“Chappaquiddick” stars Jason Clarke as Sen. Ted Kennedy and Kate Mara as Mary Jo Kopechne, the campaign aide who died in a car accident on Chappaquiddick Island, Mass. After his car drove off a bridge, Kennedy’s decision to leave the scene of and failure to report the accident to authorities for 10 hours effectively ended his chance of being elected president.Clarke is best known for his work on Showtime’s “Brotherhood” and “Zero Dark Thirty.” Mara starred in Netflix’s “House of Cards” and appeared in “The Fantastic Four.” Curran directed “The Painted Veil” and “We Don’t Live Here Anymore.”Ed Helms, Bruce Dern, Jim Gaffigan, Taylor Nichols, and Victor Warren co-star in the film. It will screen in the Gala Presentations section at the 2017 Toronto International Film Festival over the weekend.“Chappaquiddick” is the second big purchase of the festival for Allen. The company nabbed rights to “Replicas,” a sci-fi thriller with Keanu Reeves and Alice Eve.WME is handling domestic rights to “Chappaquiddick,” while Sierra/Affinity has foreign rights.