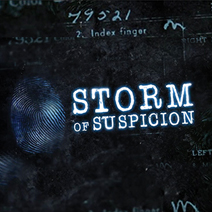 Crime, like the weather, waits for no one. But there are also times when these two forces cross paths, creating a perfect storm of violence and chaos. When the high stakes of extreme weather meet the thrilling mystery of murder, you end up with Storm of Suspicion. This gripping true crime series examines spellbinding events where weather played a central role in solving or covering up the crime.

Each one-hour episode, featuring experts and forensic meteorologists, is shaped as a real-life whodunit with weather ultimately playing the pivotal role in how the crime was resolved. It’s really the ultimate procedural-reality-drama show. From blizzards to hurricanes, floods to heat waves, Storm of Suspicion proves that when it comes to solving mysterious crimes, Mother Nature can be detectives’ best friend…or their worst enemy. Storm of Suspicion is produced by the EMMY Award Winning production teams at AMERICA’S MOST TRUSTED TV NEWS NETWORK, THE WEATHER CHANNEL, and is distributed exclusively by ENTERTAINMENT STUDIOS TELEVISION.