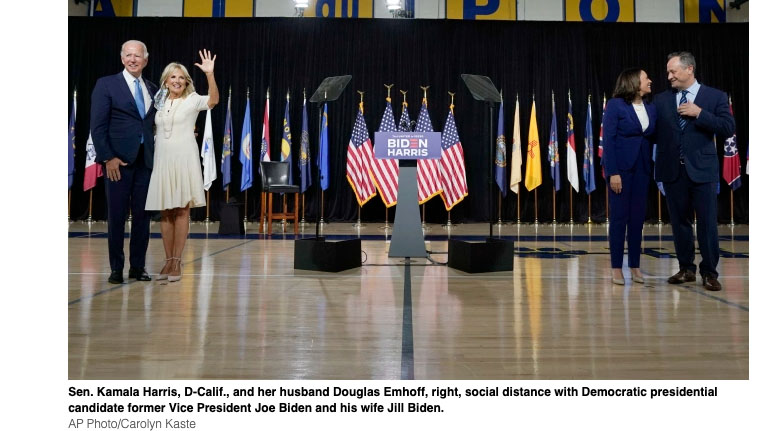 EXCLUSIVE: Fresh off of accepting the Democratic nomination, Joe Biden and Kamala Harris and their spouses are set for a fundraiser on Friday, with hosts including Jeffrey Katzenberg, George Clooney, Byron Allen and philanthropist Andrew Hauptman.

The afternoon event will be virtual, but it features an L.A.-centric group of hosts. In addition to Katzenberg and his wife Marilyn, Clooney and Allen and his wife Jennifer Lucas, other hosts include Los Angeles Mayor Eric Garcetti and Hauptman’s wife, Ellen Bronfman Hauptman, according to a source familiar with the plans.

How To Watch This Week’s Democratic National Convention Online &amp; On TV

The Katzenbergs and Andrew Hauptman hosted Biden for an event in June, which raised nearly $6 million. Last month, Clooney and former President Barack Obama headlined a fundraiser for the Biden campaign.

The Bidens, Harris and her husband, Doug Emhoff, are scheduled to also do a smaller-dollar grassroots event. The Biden campaign has lined up a series of fundraisers throughout this week, including an event on Tuesday featuring Biden and Tom Hanks.

Hanks asked Biden why wearing masks had become such an issue, given that Americans have accepted seatbelt laws and speed limits.

“This appeal to this macho notion, ‘I’m not wearing a mask,’” Biden said. “This is just the most irrational, illogical and egotistical exercise I’ve ever seen a president enter into.”