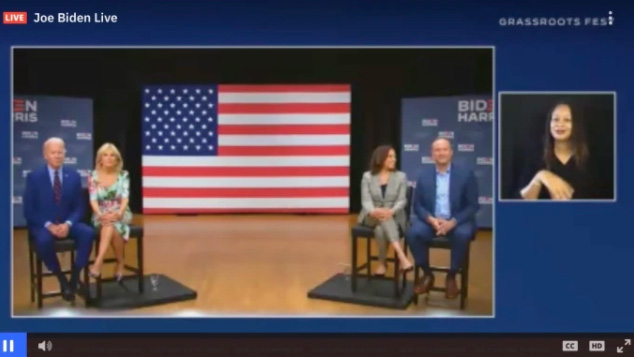 Joe Biden and Kamala Harris followed up their convention week on Friday with an L.A. centric fundraiser that raised a whopping $7 million for their campaign, organizers said.

The virtual event, which drew about 25 donors, was hosted by Jeffrey Katzenberg and Marilyn Katzenberg, Andrew Hauptman and Ellen Bronfman Hauptman, George Clooney and Amal Clooney, Jennifer Lucas and Byron Allen, and Los Angeles Mayor Eric Garcetti. Biden and Harris were joined by their spouses, Jill Biden and Douglas Emhoff.

Biden, Harris and their spouses also appeared at a lower-dollar, grassroots event on Friday. Biden said the event raised more than $1.6 million. The Biden campaign said that it raised $70 million over the convention week.

He repeated some of the themes of his convention speech, telling the crowd, “If this president gets four more years, you know as well as I do that it is only going to get worse.” Unlike on Thursday night, he did mention Donald Trump by name.

In a statement, Katzenberg said, “We are in the home stretch now. There is no question this is the most consequential election of our lifetime.”

Andrew Hauptman, chairman of Andell Inc., said, “Ellen and I are proud to lock arms with our co-hosts in support of the Biden-Harris campaign. The change coming in November can’t come fast enough.”

Katzenberg and Hauptman hosted an event in June that raised around $6 million for the campaign.

Allen, the founder and CEO of Entertainment Studios and Allen Media Group, said, “This is an extremely important moment in our nation’s history. We must all lean in, and I strongly believe Joe Biden and Kamala Harris will give America the leadership and the must-needed change that we all deserve.”

The event was organized by Jennifer Gonring, Jennifer Lin and Andy Spahn at the strategic consulting firm GLS.