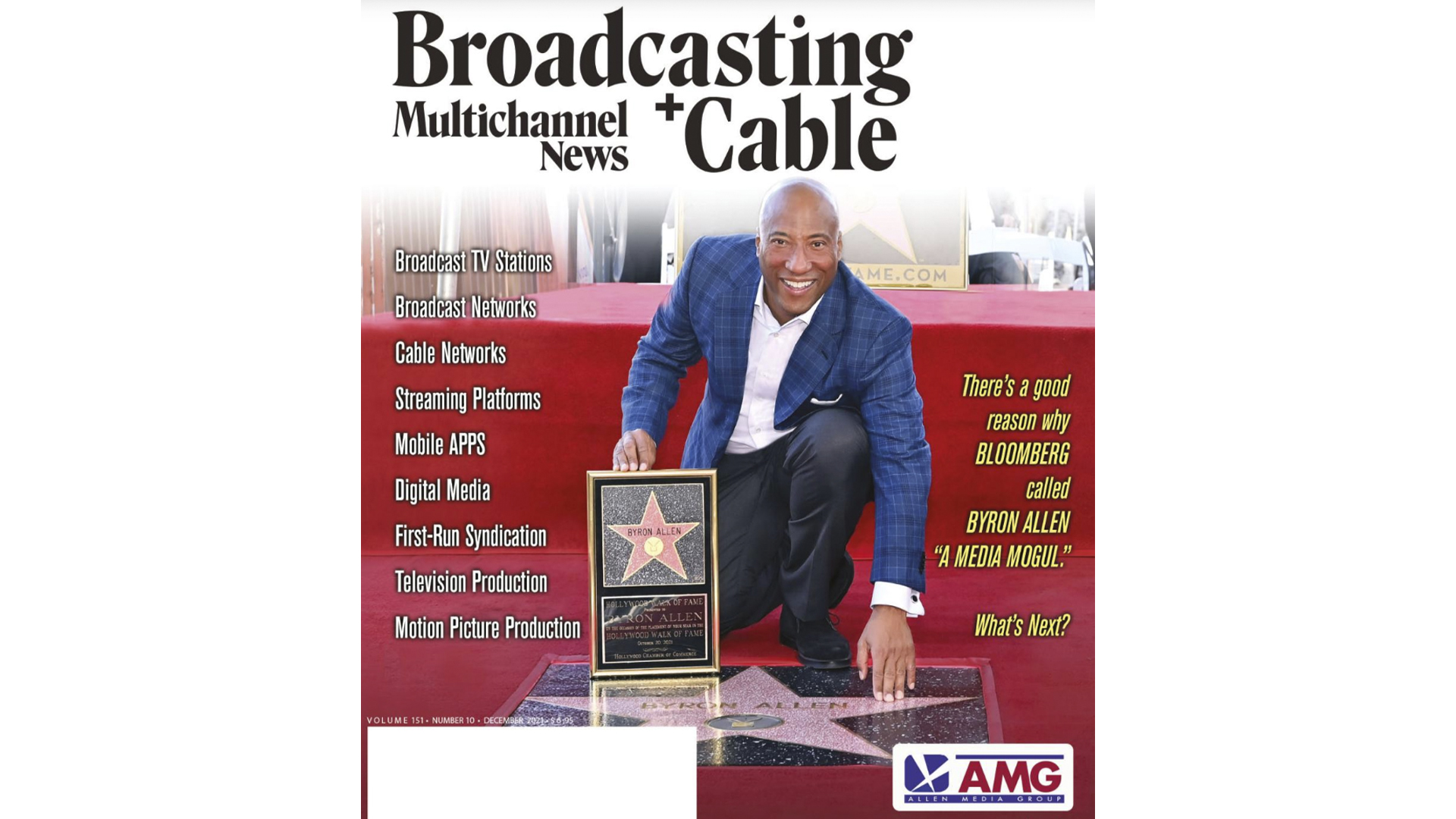 Busy Byron Allen Wants To Be Big, But Doesn’t Want To Be a Unicorn

Byron Allen is moving fast in a lot of different directions at once. The entertainer — famously the youngest standup comedian to do a set on Johnny Carson’s Tonight Show — is determined to build the world’s biggest media company. He’s buying old-fashioned local TV stations and starting up streaming services. At the same time, he wants to fix the country and save the world.

He’s also sued giant companies he wants to work with. His cable channels are carried by Comcast and Charter Communications following litigation against them. His discrimination complaint seeking more advertising dollars for minority-owned companies like Allen Media Group was dismissed earlier this month, but Allen’s lawyers say they plan to amend and pursue the complaint.

Allen told B+C/Multichannel News the lawsuits have rubbed some people the wrong way, but he sees no obstacles or contradictions in his ambition and activity.

“Please understand, we are a digital-first company,” Allen said. “Everything we do is about digital. The reason why I’ve said we’re going to be the world’s biggest media company is because no one’s in a better position to be digital-first than us.”

Allen said he was early to jump on the digital bandwagon, buying up domains like Comedy.tv, Cars.tv and Pets.tv when others were caught up in the dot-com rush. He’s also pledged to spend $10 billion on TV stations — which are about as traditional as traditional media gets.

Just as movies and radio weren’t replaced by television, Allen doesn’t see streaming replacing television. “It all turned out to be additive and the landscape became much richer,” he said. “And the landscape became much stronger because there is no one platform. It is additive and the platforms, in some way, have started to work together in symphony.”

Even with streaming services spending $50 billion on content, stations generate big audiences for their programming, especially football and other sports. “Big Four network affiliates are always going to be needed,” Allen said. “I think there’s an opportunity to be very much of a part of this dynamic landscape.”

TV stations deliver local news, and to Allen the importance of local news was driven home during the pandemic. “It was not uncommon for our TV stations to achieve 50% to 90% shares,” he said. “Local news is one of the most important things in our society. Food, water, clean air and local news. You need it to survive. You need to know what’s going on in your community before you walk out your front door.”

He said his stations now cover just under 5% of the U.S. “It is, I believe, the largest privately held station group, in terms of footprint, that is not publicly traded or multigenerationally owned — and that’s been accomplished in about two years.”

He is not finished buying stations. Allen has reportedly made a $10 billion bid for Tegna, which owns 64 TV stations. He said he couldn’t comment on Tegna because of a confidentiality agreement.

“We are very acquisitive and we are looking to buy Big Four network affiliates wherever we can achieve that goal,” he said.

While sports is a foundation of his broadcast stations, Allen also is creating a free streaming service devoted to sports called Sports.TV. The app was recently made available on the Apple app store.

“Sports.tv is something we’re very passionate about,” Allen said. “What we did there is we took the world’s two favorite words, sports and free, and we put them together. It’s a virtual MVPD and you can stream networks that are sports-centric for free. The networks include Football Encore, Pac-12 Network and the SportsGrid, some of them already on another streaming service, Local Now. Also on Sports.TV are some of Allen’s stations that broadcast sports news.

“We’re on track to have over 100 networks here in less than 60 days,” he said. “We’ll add regional sports networks, we will add pay-per-view. We will add gaming.”

Allen’s first big splash as a media owner came when he bought The Weather Channel for $300 million in 2018. He recalled that at the very end of the presentation he was given as the network’s new owner, he was told about Local Now.

“They said to me, ‘You own the equivalent of a fully distributed broadcast network that uses artificial intelligence and proprietary software to aggregate and curate local news, weather, sports and traffic and send it to the end user, geofenced in their ZIP code.’ And I went, ‘Wow, that is absolutely amazing.’ They said, ‘Don’t get too excited, because it’s losing over $25 million a year and you’re probably going to shut it down.'”

“I’ve invested over $100 million of my own capital to reposition Local Now,” he said. He changed it from a subscription service that charged $4.99 a month to a free service supported by advertising. Local Now now offers more than 10,500 movies and TV shows on demand and 400 channels. Since February it has gone from about 2 million active users to more than 12 million in September, Allen said. “You’re going to start to see promotion kick in and I think you’re going to see that get substantially much much stronger,” he said.

Allen said that Local Now did very well in the upfront. “Advertisers were very keen on being part of our digital platforms.”

Among the newer digital properties are the recently acquired HBCUGo.tv and TheGrio, which has evolved into an African-American version of Local Now, where users go to get hyperlocal news and information. TheGrio actually lives on three platforms — streaming, online and over-the-air. Allen acquired This TV and Light from MGM and turned Light, a faith-based network, into TheGrio.

Other digital initiatives in the pipeline include Weather Channel Plus, a $4.99-a-month virtual MVPD with lifestyle programming and content for the whole family, and Weather Channel en Español, a free streaming Spanish-language news service now scheduled to launch in the second quarter of 2022.

“Weather news is life-saving information,” Allen said. “You don’t want someone to not have it, and not have the best of it in real time because of a language barrier.”

“I think there’s more than enough audience to support 24-hour weather news, because the biggest threat to human beings on planet Earth are climate change and global warming,” Allen said.

The Weather Channel also started up Pattrn, a streaming platform dedicated to climate. “Unbeknownst to me, the management team at The Weather Channel did studies, and our viewers said we want more information about this and we wanted doing specials about climate change and global warming,” Allen said.

For some people, denying climate change is a business decision, but not Allen. “Coretta Scott King, Martin Luther King’s widow, said to me, ‘Byron, the truth is our greatest weapon. So always go with the truth, whether it’s business, or life, or friendship or family.'”

“People are starting to connect the dots and understand that because of climate change and global warming, extreme weather events are triggering food shortages, water shortages and genocide as people try to cross boarders to survive. It’s very real.”

While saving the world, Allen is also trying to unite a divided country. Buying The Weather Channel was a first step.

“For us, as a country and as an industry, it was a Jackie Robinson moment for me to buy The Weather Channel, because I happen to be the first African-American to own and operate a mainstream news outlet,” he said. “As a country, we should be proud of that and we sent a message to a lot of people who look like me that I don’t have to just do something in my neighborhood, or do something that’s just solely African-American. I can do something that’s global.”

But some things still haven’t changed.

“That’s a very bad statement, that America has a Black unicorn,” he said. “It is something that as a country, we need to do much better.

“If you don’t own the media, you don’t have a seat at that table and you don’t control how you’re produced and depicted and seen around the world,” he said. “Then our voices and our opinions are not heard and widely distributed. And guess what? We’re not a part of this so-called democracy.”

While he’s building his empire, he’s hoping to help other businesses through his Black Owned Media Matters movement, aimed at getting Madison Avenue to spend more on Black-owned media. He’s also looking to inspire a new generation, so he won’t be the only Black-owned TV station owner in the future. “I want to inspire folks to go to the next level,” Allen said. “I want you to break my records. I want you to make me look like an amateur because that’s making America better.”