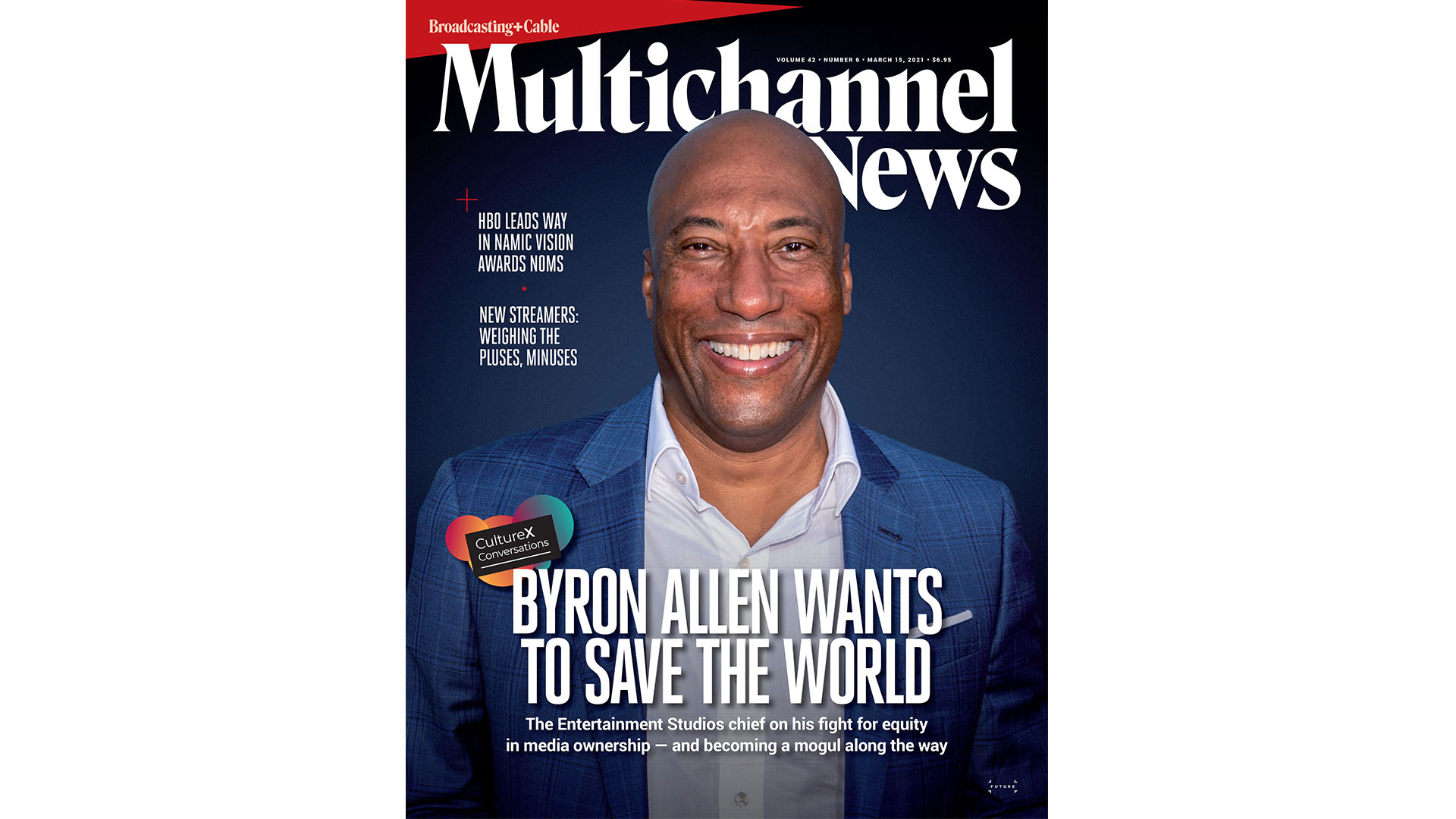 15 Mar Byron Allen Wants to Save the World

Byron Allen understands the power of multiplication. In the current world of streaming, subscription video-on-demand and direct-to-consumer offerings, multiplication is everything. When you charge tens of million people even just a few dollars a month, that math adds up quickly.

Allen made his money in the early days of syndication, sitting at his dining-room table, making phone call after phone call and getting on planes most days of every month. But after years of sheer hustle, with Entertainment Studios’ syndicated shows adding up their ratings in every market in America, the money started flowing.

In the past five years, Allen has metamorphosed from a peddler of syndicated shows to a media mogul after surprising the world with his $300 million acquisition of The Weather Channel in 2018, and then following that up by purchasing TV stations (notably including ABC affiliate KITV in Honolulu, one of 16 Allen-owned Big Four affiliated stations in 12 markets) and aggressively going after legacy station groups such as Tribune Media and Tegna. Looking ahead, Allen sees only expansion, with plans to spend at least $10 billion to acquire more Big Four network TV affiliates and to invest billions in his nascent streaming business and reach a global audience.

Beyond business, Allen has socio-economic issues on his mind — including climate change, racial injustice and economic inclusion — and he’s working hard to make an impact in those areas as well.

MCN: You sued cable giants Comcast and Charter in February 2015 for a total of $40 billion, with you alleging that their decisions to not carry your cable networks amounted to racial discrimination. Those lawsuits were ultimately settled, but did you feel that they achieved their ends?

BA: I can’t speak to those lawsuits anymore because they’ve been settled. But when I filed my lawsuits against the cable industry, it was really to start the process of creating economic inclusion.

What we’ve said to Madison Avenue is that Black-owned media is completely extinct. Right now, I’m the only African-American in America in 2021 that owns a Big Four network affiliate. As a country, and as an industry, that is not a statement that should be accurate in 2021. I’m the first African-American to buy a mainstream cable network in America. Once again, as a country, we shouldn’t be proud of that. We shouldn’t be saying that in 2021.

A lot of that is because Madison Avenue hasn’t leaned in. What I’ve asked Madison Avenue today to do is, I’ve said, look, as we represent 14% of this nation, we have every right to ask for 14% of your budget, which is economic parity. And we’re not asking for economic parity, we’re asking for economic inclusion. We’re asking for a mere 2%, a minimum, and I do emphasize the word minimum, of 2%, to go to Black-owned media, not Black-targeted, but Black-owned. That’s a big difference. That creates a real unique point of view, creating diversity and inclusion while improving democracy.

MCN: What else do you think corporate America needs to do to promote diversity and inclusion?

BA: What I would say to white corporate America is you don’t need to have a chief diversity officer. More importantly you need to — you, the chairman, the chairwoman, the leader — you need to become the chief diversity investment officer. Make sure you’re investing in people who don’t look like you and fostering greater diversity. Make sure that you are investing in women and Asian people and Hispanic people and gay people and African-American people. You need to be the leader of that.

MCN: What has the pandemic meant for Allen Media Group and Entertainment Studios?

BA: The growth because of the pandemic has been what we would call meaningful. As people went into lockdown, they went home, and national and local news became very valuable. And that happens to be the business we’re in. So we’ve got, obviously, local news. National news has been very key in the battle against COVID-19, but also as we deal with climate change.

Our syndicated shows have been growing, and because a number of the studios have abandoned first-run syndication, because they are taking their content and putting it on their streaming platforms, we’ve been able to really help step in and fill that void for stations.

And our streaming has grown really in a significant way because we have Local Now. Local Now is a really unique streaming platform because it uses unique proprietary software and artificial intelligence to deliver local news, weather, sports and traffic in real time, geo-fenced to your ZIP code. And that is a one-in-a-kind streaming service; no one else is able to provide that level of technology. It’s really something that has done extremely well for us. We have seen as much as 60% growth month over month.

So we now have four comps that say Local Now is worth quite a bit of capital. When the insurrection happened at the nation’s capital, our traffic shot up significantly because people were able to go to Local Now and watch it in real time. You need to have an app like that that responds to the moment.

When I bought it, it didn’t have movies, TV shows, documentaries and channels. We now have all of that. I’ve spent the last three years building it out, evolving it. And we have some wonderful channels there. Johnny Carson has a channel there. Bloomberg has a channel, Kevin Hart, America’s Funniest Home Videos all have channels there. People magazine has an amazing channel there. We’ve replicated the cable ecosystem, which is costing $150 to $250 a month per subscriber, and it’s free.

BA: The last report I got was we had about 5.8 million monthly active users, and that’s with little or no promotion. Now we’re going to start really promoting it.

MCN: Even though we just talked about Local Now, what you really bought was The Weather Channel. We just had this huge weather event across the country, resulting in an electric-grid meltdown in Texas. What do events like that mean for The Weather Channel?

When I first bought The Weather Channel, the network was avoiding speaking about climate change because half the people didn’t believe in it, and the other half did, and they didn’t want to offend anybody.

One of the first specials we did was called Race to Save the Planet. After it aired, the research department did some research on the special and found that 85% of our viewers really appreciated the information and wanted more, because they knew we were being honest.

MCN: Beyond Local Now, what are your plans for streaming, considering that you own all of these channels and all of this content?

We own 100% of our content, and most of it was shot without a host. We use voiceover, which means you can use artificial intelligence and put that content in 200 different languages.

If you look at broadcast TV in the ’60s, ’70s, it was broad. And then in the ’70s, ’80s, and ’90s, it became focused, and that’s when you got MTV and BET and VH1 and Lifetime and Nickelodeon and CNBC or whatever. Like then, I believe streaming is going to become focused pretty quickly. And people are going to say I have Netflix and Disney Plus and Amazon, but I also want Comedy.tv. I want Sports.tv. I want Cars.tv.

You’re going to start to see us really invest heavily in our direct-to-consumer streaming content. We’ve been sitting on these URLs for about 15 years waiting for this streaming explosion.

MCN: Would you take those networks and put them on Local Now? Or would you build a new streaming platform?

BA: Local Now will be on its own and be an aggregator of everything free. And then some of these services will be subscription video-on-demand streaming direct to the consumer for $4.99 a month.

MCN: You’ve also been saying for several months now that you intend to spend $10 billion acquiring Big Four network affiliates. How is that looking?

BA: We are 110% committed to investing approximately $10 billion to buy Big Four network affiliates. And we will do that within 24 months, if not this year.