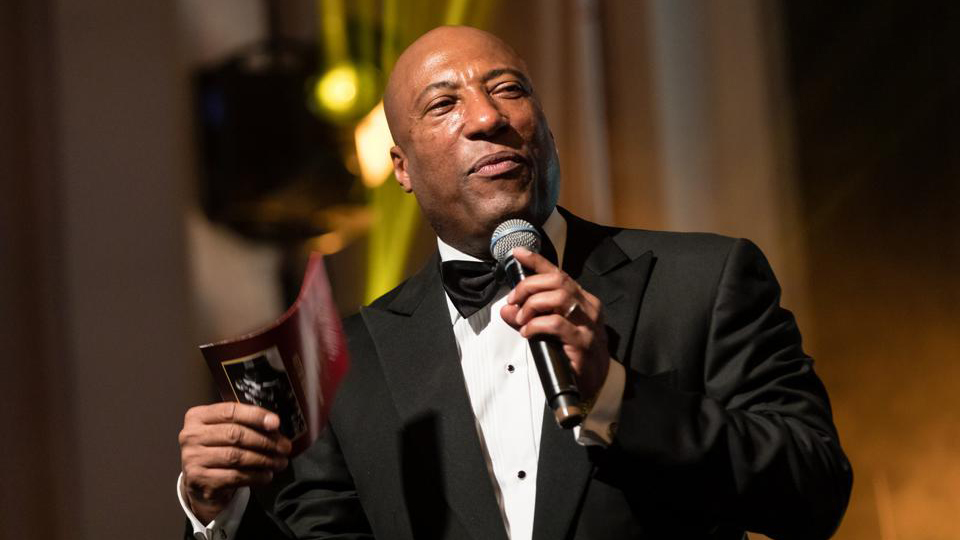 Some moguls take a circuitous route in their ascension to the higher levels of business.

Overseeing TV channels, global production of series such as Funny You Should Ask and America’s Court with Judge Ross, as well as working in film distribution, digital media and broadcasting, Allen has established himself as one of the nation’s most successful Black entrepreneurs.

Born in the 1960s, Allen’s fate was sealed when his mother, who was a teen when she had him, began working at NBC.

He told the Television Critics Association this week that the network became ‘my playground and my babysitter.’ Standing in the wings, he watched Johnny Carson work and took to standing near Carson’s parking space just to say hello to him.

“Then I would walk across the hall and watch Flip Wilson do his show, and then I’d go across the hall again and I’d watch Redd Foxx tape his show, Sanford & Son, and Freddie Prinze do Chico and the Man, and I’d just watch television get made. Then I realized, ‘this is something I love and something I want to do’”.

At 18, he was the youngest comedian to appear on The Tonight Show with Johnny Carson, quickly fielding numerous offers after the episode aired. He settled on a series entitled Real People, a show that featured stories about average Americans. The role allowed Allen to do something he loved – travel the country.

Starting his own business 28 year ago, Allen recalls calling 1,300 television stations and hundreds of advertisers – from his dining room table – trying to secure placement and ad dollars for his early programming ventures.

“The first five years were really brutal,” he says, admitting to suffering poverty and foreclosures in pursuit of his dream.

The hard work, obviously, paid off as his company, Entertainment Studios, now has over 65 shoes on ten networks and streaming platforms. His company employees well over 1,300 people and his African American-focused news site, “The Grio,” is the largest of its kind in the country and is also the biggest employer of Black journalists.

Allen has always been civic minded, saying that this was instilled in him early on in his life when he witnessed his family’s horror and grief at the assassination of Martin Luther King, Jr.

In 2015, he filed a multi-billion-dollar racial discrimination lawsuit against cable giants Comcast CMCSA -0.7% and Charter. The suit went all the way to the Supreme Court with Comcast reaching settlements with Allen.

In arguing his case, Allen used the Civil Rights Act of 1866 which is meant to ensure the economic inclusion of freed slaves.

He’s also concerned about the environment, as evidenced by his commitment to educate viewers about climate change.

After buying The Weather Channel three years ago, Allen he made the conscious effort to change the network’s message about the issue, explaining, “[The network] had a way of making sure that they didn’t offend folks. They would never talk about climate change and global warming because there were some people over here that said it wasn’t happening and some people over here said it was happening. [I decided that I was] going to go with the scientists, because people don’t truly understand that climate change and global warming is the greatest threat to human beings on planet earth, and we have to inform folks so we can help save lives.”

He sees this as a big responsibility, saying, “We as a planet have to come together and address it because it is a real threat, So I want to make sure we take this opportunity to make sure we do everything we can to help as many people as we can.”

Looking forward, Allen has said he plans to spend $10 billion over the next several years to become the nation’s biggest broadcaster.

But, he says that amid all the work, it’s his family, that keeps him on the right track. “Sometimes it’s a little humbling when [my kids] let me know that they’re much smarter than me. But I say, that’s the point, my job is to make sure that [they’re] much better than me.”

He recalls, “When I met my wife 21 years ago, she asked me what was I doing with my life. I told her I was building the world’s biggest media company. And I thought, you know, this is when she’ll say, ‘Well, he’s the craziest guy I’ve ever met and this will be the last time we’ll speak.’ Thank goodness she didn’t take that position.”

Allen says that he really hasn’t had a ‘job’ since he quit his paper route when he was ten years old, because what he does doesn’t feel like work to him. “I love what I do, so it’s just natural, it’s like breathing, I can’t wait to get up and do it.”