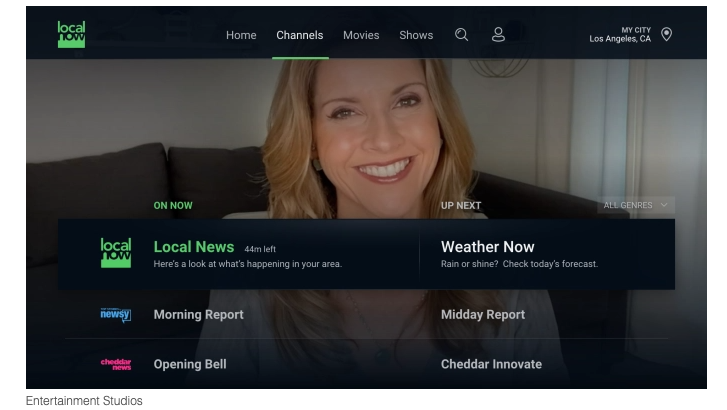 No part of the media business is more crowded than streaming, with thousands of subscription-based and free services continuing to hit the market. Despite the glut, Byron Allen believes he has two new offerings with something unique to bring to the party.

The media executive and Allen Media Group CEO this week has been touting two expanding services: Pattrn and Local Now. Pattrn is a sister platform to the Weather Channel, which Allen bought in 2018. Local Now launched several years ago as a money-losing subscription offering by the previous owners of Weather.

Pattrn, a free and ad-supported outlet, has just added carriage on Fox Corp.’s Tubi and soon will be on indie streaming media provider Plex. Allen says it is now the most widely distributed 24/7 streaming outlet dedicated to climate change. Along with the carriage news, Pattrn on Thursday will kick off the Earth Film Challenge, with winning shorts airing across Weather Channel TV and streaming platforms in the fall. “These new partnerships and initiatives will further establish Pattrn as not only the climate hub of the Weather Channel television network, but the ultimate authority on these critical issues for audiences of all ages,” Allen said in a press release.

Since launching as a social video offering in 2018, just after Allen acquired Weather for $300 million, Pattrn has gone on to attract 50 million global users.

Local Now is a broader offering whose origins predate the Weather acquisition. After starting out as a subscription offering, it is now free and supported by ads. It delivers a swath of on-demand film and TV titles, live linear networks, and news and weather customized to each ZIP code in the country.

“People have achieved premium content, but not the super-hyper-local experience that we offer,” Allen told Deadline in an interview. Established news-focused streamers like Haystack or local bundlers like Vuit or NewsOn don’t have an entertainment dimension or hyperlocal capability, Allen notes. Large-scale free streamers, meanwhile, layer in some news but aren’t aiming to be a go-to if a snowstorm is approaching or election precincts are reporting results.

After the company announced the service’s emergence from a three-year test phase this week, Allen spoke with Deadline and revealed new details like a carriage deal with Verizon and metrics for the service. He said it has drawn 5.8 million monthly active users “with no promotion,” but a spike on January 6 as viewers tuned into coverage of the assault on the U.S. Capitol highlighted the opportunity.

The streaming element of Allen’s $300 million purchase of The Weather Company in 2018 from Bain, Blackstone and NBCUniversal was an afterthought, if even that. The three sellers had acquired Weather from Landmark Communications in 2008 for around $3.5 billion and then sold the company’s digital assets for more than $2 billion to IBM in 2015. The digital juice seemed to be in the Weather app and site.

That thinking reflected the landscape before ad-supported services like Pluto, Tubi and Xumo started demonstrating the value of AVOD. Each was acquired by media companies for hundreds of millions over the past two years, and streaming-centric Cheddar also went to Altice USA. Allen said he has invested $100 million in Local Now thus far, transitioning it to an ad-supported operation and making deals for both programming and distribution. Already widely available on digital platforms like Roku, Apple and Android, it was just added last week to Amazon Fire TV’s gateway to 50 million streaming homes. The service is also now on Verizon Fios pay-TV bundles.

“They told me when I bought it that it was losing well over $25 million a year and that I should just shut it down,” Allen recalled. “When I bought it, no AVOD had ever traded” at a large multiple. As the shift from linear to streaming accelerated and new bets were placed on the space by Roku, NBCUniversal, Amazon and others, the potential for Local Now became clear. “It was a gift,” he said. “That’s why I said there was no way I would shut this down. I basically got a multi-billion-dollar asset for free.”

Allen’s other holdings feed into Local Now, which is another strategic incentive for the company to boost it. From his beginnings as a stand-up comedian, Allen has gone on to become a force in syndicated television, independent film and many other areas, starting his company, Entertainment Studios, in 1993. It has gone on to release indie breakouts like 47 Meters Down and Hostiles and amass a portfolio of HD networks like Comedy.TV, Cars.TV and Pets.TV as well as digital assets like TheGrio.

While top groups like Nexstar, Sinclair, Tegna and Grey are not in the fold, Allen said the local station fare is “additive” but not essential to the service’s geo-targeting approach. Digital content from Yelp, Yahoo and a number of other providers fuels studio segments produced by Allen Media Group.

About 25% of the service’s active viewers are cord-cutters, Allen estimates. “We determined that it needed it to be free and it needed it to be comprehensive, simple and essential,” he said of the switch from the original owners’ plan. Fine-tuning the strategy has taken time, with the three-year test period allowing the collection and evaluation of viewer data.

Overall spending on streaming ads is surging and newer players like NBCU’s Peacock and the forthcoming HBO Max AVOD tier are giving ad buyers fresh venues. A recent forecast from research firm MoffettNathanson estimates total AVOD spending will reach $17.8 billion, from $4.4 billion in 2020. While Hulu currently controls more than half the market, more players are expected to grab share in the years to come.

The unique Local Now experience, Allen believes, has global potential. “It’s a streaming platform that’s really alive,” he says. “It’s not a collection of movies and TV shows. It’s almost like a living being.”

Jill Goldsmith contributed to this report.