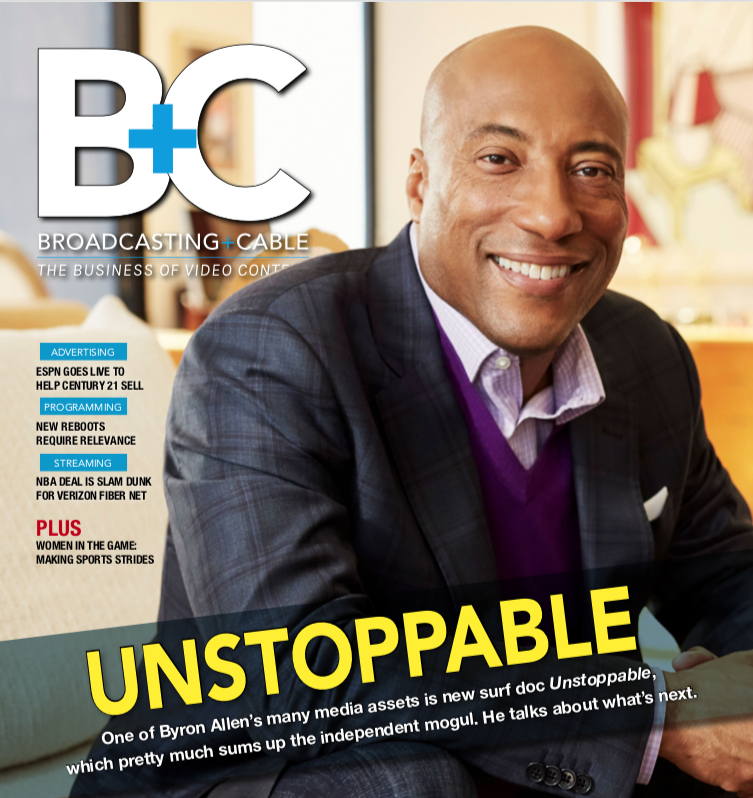 Byron Allen Is Not Kidding Around

He stepped onto big stages as a teen, and now sets his sights on expanding his empire

BYRON ALLEN is one of the busiest people in show business. But Allen — the founder, chairman and CEO of Entertainment Studios, who has made the unique transformation from on-air personality to media magnate — is keeping his cool. Chatting in a conference room in his headquarters in Century City, the wall behind him covered with Andy Warhol paintings, he’s philosophical about his shift to moguldom.

“I learned early on that for me, it wasn’t show business,” Allen said. “It was business show.”

Indeed, business comes first. Allen took a giant step toward amassing an empire in March 2018, when he acquired The Weather Channel for $300 million.

He’s hardly slowed down. In May alone, Allen emerged as an equity partner in Sinclair Broadcast Group’s deal to acquire 21 regional sports networks from The Walt Disney Co. for just shy of $10 billion, days before he acquired four TV stations for $165 million from Bayou City Broadcasting.

Allen does not appear to be finished acquiring. A sports franchise may happen. “I’d love to take a good look at a basketball team, an NFL team,” he said. “That would be a lot of fun.”

Despite being the rare independent owner of major media holdings, Allen remains something of a low-key figure in Hollywood. Entertainment execs note his growing portfolio and Wikipedia entry, but many say they don’t know Allen all that well.

“He is one of the hardest working persons in entertainment,” said Dave Smith, CEO of consultancy SmithGeiger. “He is present at any industry gathering, setting up meetings, pitching his projects and just being present. He never has disappeared or given up, always creating and always pitching something.”

Allen shared his plans for growing his assets from company headquarters. Dressed casually in a collared shirt and slacks, he was effusive, apologizing a half-dozen times for being tardy.

He grabbed The Weather Channel from Blackstone Group, Bain Capital and Comcast, a pact that did not include weather.com. In June, Verizon Communications agreed to carry the network on Fios TV after a four-year impasse. “They were my first phone call when we bought The Weather Channel,” Allen said. “I went right to the top of the house.”

The Fios addition means The Weather Channel’s subscriber base now stands at 78.2 million in July, down 1.9% from a year ago, while other cable services are down an average of 5%, according to Nielsen and Weather Channel.

Tom O’Brien, former Nexstar Media Group executive VP, was named Weather Channel president in February. Allen calls the network “a phenomenal business” in the unique position of saving lives in an era where extreme weather is hardly a rarity. “For that to be in the hands of an independent, and the fact that this network really does help protect and save lives and property, that’s a huge responsibility,” Allen said. “We don’t take it lightly.”

Some wondered about the lofty price tag, but the numbers worked for Allen. “I think he sees things that other people don’t see,” said Arnie Kleiner, retired KABC Los Angeles president/general manager. “He sees opportunity.”

The ad-supported video-on-demand platform has already hit 1 billion viewed minutes, Allen said, and over 1.5 million people have downloaded Local Now despite minimal marketing. Allen said he could sell Local Now for more than he paid for Weather Channel.

It’s gotten the attention of Bill Hague, executive VP at consultancy Magid. “I think they’re onto something,” he said. “Local Now is an innovative, entrepreneurial approach to weather content that is addressable.”

The deal with Sinclair for the Disney RSNs, spun off from Disney’s 21st Century Fox acquisition, will see Entertainment Studios provide content for the networks. Allen has known the Sinclair folks for decades, selling them syndicated shows.

He has major plans in local television. The Bayou City deal includes a pair of affiliated stations in Evansville, Indiana, and two more in Lafayette, Louisiana. “It’s a great way for us to start our journey in the broadcast-network affiliate business,” he said. “We’re very enthusiastic about the Big Four network affiliates. We plan to be aggressive in that space. Our goal is to buy as many as we can.”

The Bayou City seller was DuJuan McCoy, meaning the already paltry group of African-American station owners stayed flat with Allen’s purchase. Another African-American owner, Armstrong Williams, thinks the stations will benefit from the new owner. “When you sit with Byron, you’re not sitting with a comedian,” Williams said. “You’re sitting with a serial entrepreneur.” Williams calls Allen a marketing genius with “personality galore,” and a set of brass knuckles to boot. “I don’t always understand how he does it, but he does it,” he said.

Allen’s other holdings include a batch of TV networks, including Comedy.tv and Justice Central; syndicated shows such as America’s Court and Comics Unleashed, which Allen hosts; and
a motion-picture division that includes shark thriller 47 Meters Down and surf picture Bethany Hamilton: Unstoppable.

On Oct. 29, Allen will be inducted into the B&C Hall of Fame.

A sign next to the Entertainment Studios elevators reads: “Mediocrity or greatness is simply a decision. Choose greatness!”

Allen’s showbiz background is uncommon. Relocating to Los Angeles’ Miracle Mile neighborhood after his birth in Detroit, Allen’s mother worked at NBC, and he hung out at the network’s headquarters frequently, watching shows tape and chatting up Johnny Carson in the parking lot. “I’d say, ‘Hello, Mr. Carson, you had a great show last night,’ and he’d say, ‘Thank you, Byron,’ ” he related.

Allen began doing standup at 13 or 14, he said, and parlayed that to a spot in comedian Jimmie Walker’s writers’ room, where he pitched jokes alongside young comics Jay Leno and David Letter- man. Allen got $25 for every joke that was accepted, proudly show- ing off a framed check from Walker that he keeps in his office.

It paid a lot better than delivering the Los Angeles Herald Examiner. “I was getting half a penny a paper,” Allen said. “I had to throw two papers to make a penny.”

Leno laughed as he recalled those days in Walker’s writers’ room. The comics would sometimes give Allen a ride, Leno said, so he wouldn’t have to ride his bike. “To me, he’ll always be 15 years old, sitting around the table, pitching jokes, eating chips and drinking soda,” Leno said. “When he bought Weather Channel, it just made me laugh. Byron has done tremendously well.”

Allen used his connection to Carson, and rich standup experience despite his age, to perform on The Tonight Show at age 18. The blazer he wore that night in 1979 is framed and hangs on his office wall. Allen mentioned his mother Carolyn taking him to buy it, Allen praying her credit card would work.

“I was very comfortable on The Tonight Show stage, because I’d been there hundreds of times watching,” he said.

Weeks later, Allen was tapped to co-host Real People on NBC. Dick Robertson, former president of Warner Bros. Domestic Television Distribution, recalls taking Real People into syndication in the early ’80s, and Allen asking if he could come along to NATPE. “He just had a natural curiosity about how the television business worked,” Robertson said.

Allen proudly noted that he’s attended 38 consecutive NATPE shows. “I may be the Cal Kleiner refers to Allen Ripken of NATPE,” he quipped.

Kleiner refers to Allen as a “one-man band” in the early days, producing shows, hosting them and sell- ing advertising, along with his mother, from his dining room table. The shows weren’t Wheel of Fortune and Jeopardy!, but Allen always found buyers. “You did business with Byron because you liked to,” Kleiner said. “You had to fill your time with something, so you may as well do it with someone you like.”

These days, Allen is consumed with a lawsuit against Comcast. In June, the Supreme Court agreed to decide whether Comcast can be sued for racial discrimination. Allen has said that Comcast refused programming from Entertainment Studios because its owner is African American. Comcast countered that it supports diverse programming, and that the decision to not carry Entertainment Studios networks was a business one.

“The industry is spending approximately $70 billion a year [on cable networks], and of that $70 billion, pretty much zero is going to African-American-owned media,” Allen said. “That’s something that needs to be course-corrected.”

Allen had previously levied lawsuits against AT&T and Charter Communications, alleging racial discrimination. He said companies could’ve avoided court had they been more open. “If they simply sat down and talked with me, I think this issue could’ve been resolved,” he said. “You don’t need to hide behind your lawyers. Just be a man and be respectful and treat me the way you want to be treated. Just sit down.”

Whatever free time Allen has, he enjoys spending with family, including children ages 10, 9 and 6. The kids don’t allow him to watch much television. “Dealing with Comcast and Charter and the Supreme Court is easier than dealing with my kids over the remote control,” he said.

Between his work on television years ago and in television these days, Allen has pretty much done it all in entertainment. But a few role models help him rise out of bed each morning. “Every day, I’m chasing Bob Iger and Rupert Murdoch. They’re the best. They inspire me,” he said. “I love what they do. I love how they do it. So I’m chasing two of the best.”