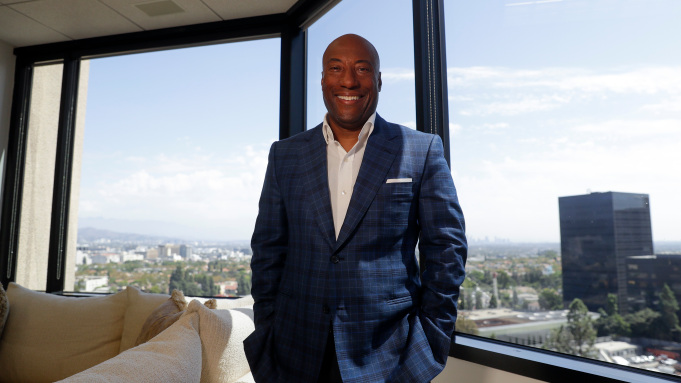 By Tonya Mosley and Allison Hagan

Comedian Byron Allen is one of the few Black Americans to own and operate a major media company.

In 1993, Allen founded Allen Media Group/Entertainment Studios, which now includes ownership of the Weather Channel and the production of several popular judge and game shows. And he’s now taking on what he says is inequality and racism in the industry — one lawsuit at a time.

This month, Allen filed a $10 billion lawsuit against McDonald’s alleging the fast-food company practiced racial discrimination by not advertising on Black-owned media outlets.

And on the business front, Allen is now expanding his broadcast TV empire: This spring, he purchased seven local TV stations for nearly $380 million and launched Local Now, a streaming app for local news, weather sports and traffic.

“I think local media is very important,” Allen says. “As we saw in this last pandemic, it was essential news and information because people needed to know what’s going on with COVID-19 in their community.”

And TV stations are “pillars of the community,” he says, so he’s invested close to $1 billion in buying big four — ABC, NBC, CBS and Fox — affiliate stations across the country in the last year and a half.

The local news industry has struggled over the last decade or so. The revenue streams have been hijacked by the ability of local news consumers to get headlines anywhere. And the solution is a code that no one has quite cracked yet.

Allen is investing money in places where a lot of people have given up because he believes local media will always exist.

When he bought the Weather Channel in March of 2018, he found out he owned a system that uses artificial intelligence and proprietary software to curate, aggregate, produce and stream local content based on a person’s zip code. He was told he’d want to get rid of the system because it loses more than $25 million per year, but instead, he chose to keep investing in it.

Now, Allen says he has invested more than $100 million to reposition this asset, which has been in beta for three years. And he decided to make the service free.

Local Now gives audiences access to 10,000 movies and TV shows as well as 300 channels — with big names such as Bloomberg, Kevin Hart, Johnny Carson and People Magazine — all for free, he says.

“If you enjoy the app, you’re immediately going to share it with all your friends and your loved ones. And they keep sharing it,” he says. “And it really is amazing how fast it grows with no real promotion of Local Now. Most people don’t even know about Local Now.”

Jeffrey Katzenberg did a “terrific job” with the short-form streaming platform Quibi — but “people really love the word free,” Allen says. Media consumers are making choices about what they want to pay for, and Local Now delivers the free content they crave.

“I think that super hyper-local news and information is very important because we do live in a complicated world and you need that information in real-time,” he says.

He recalls bouncing from studio to studio at NBC to watch Johnny Carson tape “The Tonight Show,” Redd Foxx tape “Sanford and Son” and Freddie Prinze tape “Chico and the Man.” He also saw tapings of a then-unknown weatherman named Pat Sajak and a sportscaster named Bryant Gumbel.

At 18, Allen became the youngest comic ever featured on “The Tonight Show,” which led to his role on the early-1980s reality show “Real People” and his own comedy specials. He recalls starting off writing for Jimmie “J.J.” Walker and earning $25 per joke while Jay Leno and David Letterman were making $200 per week.

This memory of his early days in the entertainment industry gets to the point that Allen has been pushing for years: economic inclusion specifically for Black-owned media companies.

In addition to suing McDonald’s, Allen filed a $20 billion lawsuit in 2015 against Comcast and Charter Communications, claiming his TV channels weren’t offered its cable bundles because of racism. The case made its way to the Supreme Court last year. Allen later withdrew the case as part of a settlement.

Last summer, Allen wrote an op-ed titled “Black America Speaks. Americas Should Listen.” In the piece, he recalls his own experience finding out about the death of Martin Luther King Jr.

“Being the youngest comedian on ‘The Tonight Show’ with Johnny Carson at 18, that is all wonderful and amazing. And I’m very blessed to have had those opportunities,” he says. “But this is the important work. This is the work where we make America stronger. And the way we make America strong forever is we have to achieve one America.”